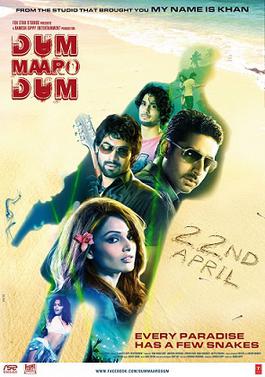 I just watched Dum Maaro Dum at Dubai Mall. As usual, I liked it more than did the company I was with (

allvishal et al). It's about pretty people getting high and getting killed in Goa. Abhishek Bachchan plays a cop who specializes in kicking down doors and beating the crap out of guys. Bipasha Basu plays a hottie in skimpy clothes, and is believable in the role. Throughout the movie, the audience is endeared to characters, one by one, who will be killed, one by one. The audience doesn't mind. The film was formulaic, predictable, unrealistic, and violent, but aside from that, I didn't really find anything wrong with it. It ran long, I guess. Here's a blurry picture of an apartment I looked at a few days ago. I'm looking for a new place to live. (Actually, I've found one now, and I'm not going to tell you where. Except that I already told some of you. Like.

dubaiwalla. I can't move until July. I'm way too excited already.) This is not the place I'm considering. This place was pricey for the size, but the location is cool. (And I was especially excited about the round room.) But I didn't realize just how cool the location was until I showed it to the guys I saw the film with tonight. One of the buildings you can see out the window is where they reside. How cool it would be to live across the street from them! But it's noisy, they told me. They said the mosque next door has four times the usual number of loudspeakers. They said I'd never get any sleep.

Not only don't I have image hosting right now (Except for LJ), I also have yet to buy my smart camera. I'm thinking Nikon D3100. I should be able to get it before going to India at the end of May. To see